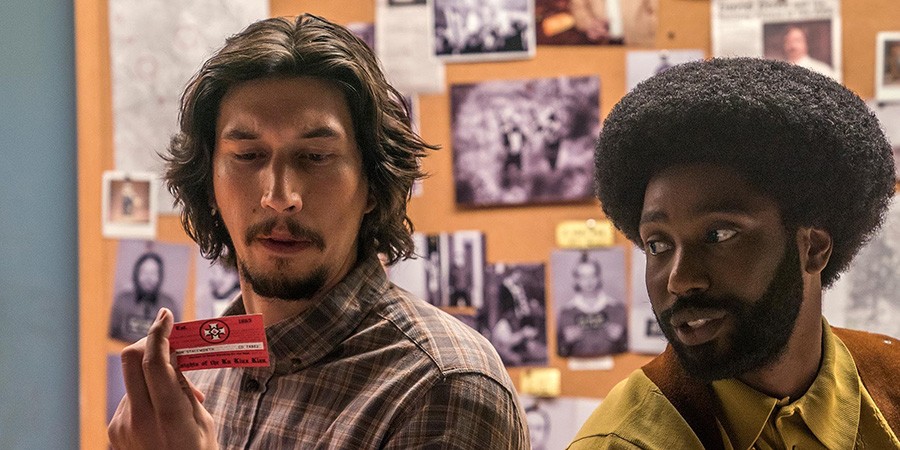 Movies that attempt to comment on the current political and social climate of the world can either be too overbearing or a little underwhelming. Modern cinema is an escape for a lot of people to get away from the ugliness that is our world today. Yet sometimes there are movies that are important, ones that need to be seen by as many people because of the profound impact it leaves on you and inspires you to want to make change. A movie that has a very deep and impactful message and can be supplemented with humor and thrills that leaves you engaged and mesmerized. BlacKkKlansman is exactly that film.

Based on the outrageous true story, BlacKkKlansman portrays how Colorado Springs first black cop, Ron Stallsworth, infiltrated the Ku Klux Klan by posing as a white man. Talking to the leaders of the Klan by phone and having his white partner do all the in person interactions, they work undercover to take down the organization that stands for violence and white supremacy.

Yes this is a true story, an engaging and interesting one at that. The movie has a great premise that is able to explore topics of racism, oppression, supremacy, privilege, and the current political climate all without feeling like it is in your face. The movie certainly is not subtle nor is trying to be in your face. It examines how even though we may have allegedly moved past dark times, they are still certainly among us. It is a scary thought, and director Spike Lee is not afraid to send a message to people today about how society actually is even when we may think everything is right and dandy.

John David Washington and Adam Driver are both exemplary in this movie, able to showcase the right amount of drama and humor that is needed for a piece like this. Both actors are able to navigate extraneous situations with the right amount of realism that truly makes you question how these events could possibly be real. Sure the story might be dramatized for cinematic purposes, but Washington and Driver are able to convey the human side and ridiculousness of the situations.

The movie works great as a cop drama. The infiltration, the behind the scenes undercover work, and the manipulation of it all is fascinating and left me engaged. When the movie begins to heighten in its drama, you are right there with it on the edge of your seat waiting to see which shoe drops first. Director Spike Lee doesn’t just engage with the police work of it all, it showcases the correlation with risk and outright idiocy and the amount of influence that people in power possess.

The way Spike Lee engages with the message of his film and illustrates it, provides gut-wrenching and captivating moments that enthrall you. In the opening moments of the film, we see Kwame Ture (a member of the Black Panthers) earnestly talking to a group of black students about the climate of systematic political oppression. They way he speaks is insightful and comes from true experience that makes you forget you’re watching a movie and places you as a member of the audience. Your ideas become challenged and you see the struggles that a cop like Ron faces with trying to battle the oppression while also trying to debate the teachings of a man who has lost so much. It’s dynamic and provoking to watch.

Contrasting this with the interactions we see with the Klansmen shows how hateful society is still is. They pat each other on the back, make jokes about being the superior race, and plot against African Americans and Jews with such precision that it’s hard to understand how this hate could have manifested itself. While the Klan watches a film that inspired their movement, it is contrasted with a speech by an elderly black man speaking about a dehumanizing event that he and his friend experienced in his youth at the hands of white officials. The duality to it leaves a profound impact making it tense and enticing to watch.

The movie does not try to justify the Klansmen, but rather showcase the true racism and hate that still exists in our society today. Just the fact that Klansmen are so easily tricked by a black man on the phone because he “sounds white” already shows the subtle racism that society still possess today. While these moments can sometimes be played for humor, it highlights the real and present danger to the characters and the country as a whole. They aren’t portrayed as caricatures or figments of the imagination, the members have a complexity to them that brings realism making it horrific to watch.

While this is a hard hitting drama about those complexities, the movie is able to have a satirical sense of humor to it. You laugh at how overtly racist the Klansmen are, the way they are so easily tricked, how Ron and his partner deal with their findings, and the sheer insanity of it all. The performances certainly highlight that humor and help balance a very dark and surprisingly real message it is trying to convey. But the humor is the exact point of the movie. The reason you’re laughing highlights the exact problem our society still faces today. The movie never makes you feel bad for laughing, but you open your mind and think about why you find it funny and it leaves an impression on you that achieves Spike Lee’s goal.

The movie is not afraid to be real, and there are certainly moments that will make you sick to your stomach about how little progress America truly has made on oppression and racism. The ending credits sequence paints a powerful image that brought me to tears and opened my eyes to how our society actually is. It is a painful reminder, but an important one that speaks volumes to audiences and needs to be seen by every member of this country.

Check out another films: Sorry To Bother You Review