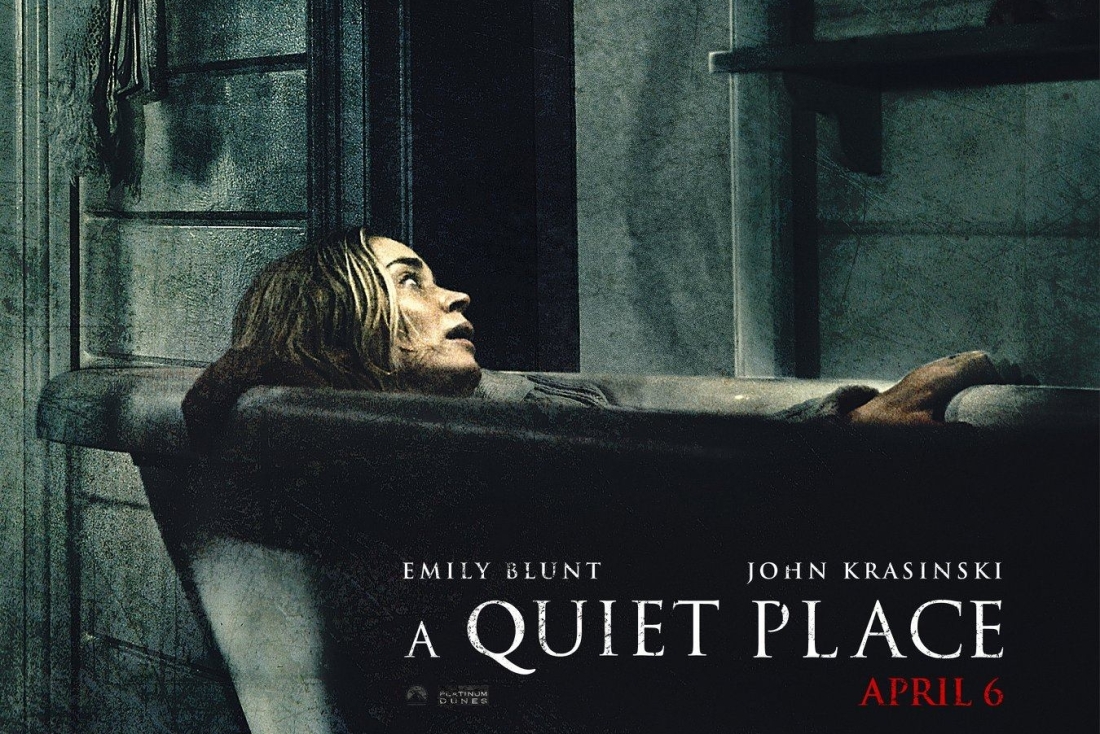 John Krasinski’s directorial debut is a thriller rife with tension that tackles one of the most common things we do not think about: sound. Taking away one of the five senses of humans is an extraordinary blow, especially when we are all so accustomed to that way of life. Krasinski’s film throws you into its world and delivers one of the more tense thrillers in a while that will give you plenty to talk about and analyze for years to come.

The world has been changed due to the introduction of new creatures that are highly sensitive to sound with even the tiniest crunch of a leaf alerting them to your presence to be killed. In this apocalypse, we are introduced to a family struggling to adapt and survive amidst a world where they cannot use sound to communicate or do menial tasks. Needless to say, the situation quickly escalates as new challenges arise.

The film wisely only focuses on the members of this family and it allows us to easily connect with our characters and understand the scope of this world we are being shown. While our characters are never referred to by name, they are all given enough to do that justifies their inclusion in the plot. The standout is the oldest daughter who was born deaf and is deaf in real life. The way that the film explores her perception of sound and frustration with not being able to hear adds another layer to the movie’s message about our use of sound. She delivers a dynamic performance with just the use of sign language and facial expressions and engagingly sells the feel of this world.

The world feels lived in with particular attention to detail of all the things that could attract sound. Sand is used to cover the paths they walk on, Monopoly pieces are made with socks and blankets instead of the usual metal pieces, and they can’t as much exclaim in pain all due to fear of these creatures killing them off. It’s impressive all of the things Krasinski and his team thought of to make this feel like it could actually happen and all of the steps necessary to live a semi-normal life in the midst of fear. It also speaks volumes to the way we use sound in our everyday thinking and makes us think twice about how certain decisions may be made.

While not necessarily a thinking piece on how humans use sound, Krasinski has done a great job at effortlessly drawing our attention to the sounds made and not made. Most of the film is in silence and there are probably only 15 lines of dialogue period. The absence of the perception of sound allows the movie to have another hint of uniqueness to its setting and engages you more of the world. Any movie that makes you hold your breath in fear for 90 minutes straight or keeps others around you quiet succeeds in the task is setting out to accomplish.

In terms of flaws, the film doesn’t fully commit to its absence of sound due to the score. The score paints a contrasting message from the overall feel of the film that it makes you think if the film could have been better with just a few sound effects and light music to bring you into the experience more. The first 10 minutes of this film had no score to them and I was holding my breath at even the simplest movements this family was doing. I wish they had carried that out through its entire run time.

The film also brings up a lot of questions and plot holes given how the rules of this world have been set up. We don’t see anyone outside of the family but it is implied that there are more people out there giving a hint of a larger world that isn’t responding appropriately to such a crisis. The film also has its best moment of tension with the mother being pregnant in the last part of the second act, but it also brings up questions as why someone would think of becoming pregnant in such a crisis?

These questions aside are more nitpicks rather than glaring flaws in an otherwise great movie. Krasinski’s absence and use of sound of this movie provide a different movie experience that engages us to see how we also live our lives. It’s an appropriately paced movie that moves along briskly and leaves its audience on a show stopping ending that can be taken in any direction moving forward. I am excited to see what can come next from this world and how Krasinski can continue to impress us with more original ideas.