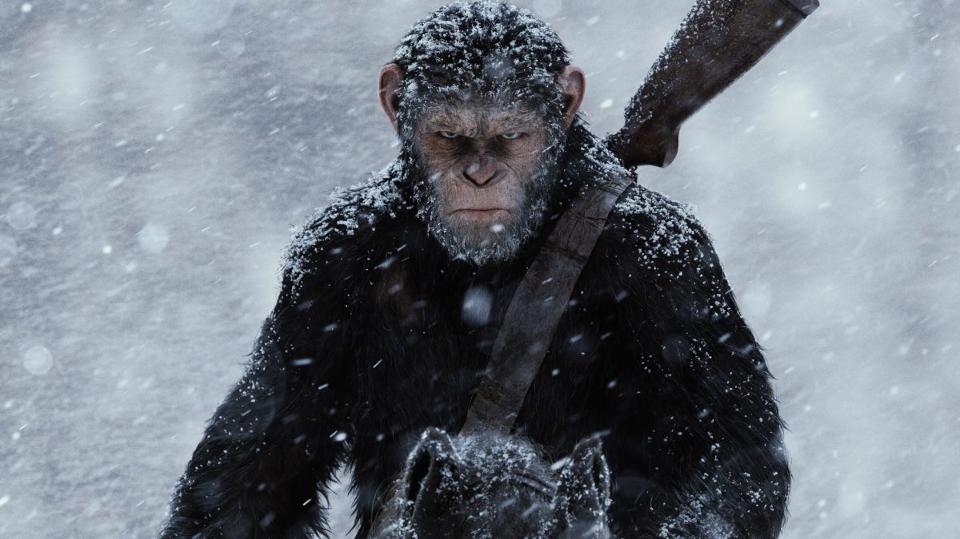 The Planet of the Apes franchise has had an interesting history spanning many reboots and some weird technical ideas. When the first film in this new rebooted trilogy came out, it had a surprisingly more mature tone and cemented itself as a new building block for this series. It explored the idea of humanity and how we try to better ourselves but in the end it becomes our own undoing. The sequel further explored this idea with the lead ape Caesar trying to be better than humans but ultimately realizing that his tribe is slowly becoming like us. Now in the culmination of Caesar’s journey, we see the apes try to escape the clutches of being annihilated in what is a very satisfying end to an outstanding trilogy filled with great drama, themes, and suspense. War for the Planet of the Apes proves once and for all that apes together are undoubtedly strong.

Taking place sometimes after Dawn of the Planet of the Apes, we follow Caesar (Andy Serkis) and his tribe of apes in a war with the human race. Caesar did not want this war and is desperately trying to find a way to secure his species safety away from all the blood and violence. After the humans, led by their Colonel (Woody Harrelson), march a devastating attack on the apes, Caesar intends to end the war once and for all and goes on a quest of revenge to protect his kind.

This film is less a war film than it is a drama about human nature. In fact, I can only recall about two battles that occurred in the entire film. The events in this film tie directly back into the previous two entries and you see how certain characters such as Koba (villain in the previous movie) have now influenced Caesar and the world he lives in. Where Caesar berated Koba on his treatment of humans in the previous film, he now begins to understand those flaws and how they can not always be better than humans. Caesar is on the journey of his life and has to make tough decisions that may go against what he has taught his fellow brothers.

This movie would not work nearly as well if not for the amazing effects done to bring these apes to life. When you look at these apes, there is no question in your mind as to whether they are real or not. The motion capture and effects are seamlessly realistic and help to immerse you in this journey. Let’s not forget Andy Serkis’ outstanding performance. Most people do not even realize that Caesar is actually a man dressed in a costume pantomiming all of the actions of apes. It is unbelievable how well Serkis can bring this character to life and imbue the sense of emotion he does.

Like I said earlier, War is more of a character drama and less about an actual war. This species has endured a lot, lost people, and ultimately Caesar is the one dealing with the same problems that faced Koba with humans. It is that internal struggle of Caesar to not become like the apes before him and yet still attain his goals that drives this film to success. The Colonel acts as the “human villain” in the film and undergoes similar problems to Caesar in the case of ensuring his species survival. The Colonel may seem villainous in the beginning but it is hard to not empathize with his situation as you learn more about his plan. The dichotomy that exists between Caesar and him is excellent and gives the movie an added depth.

The action in this movie is minimal, but when it happens it is tense and frightening. Unlike other big Hollywood budget films that are sometimes afraid to take risks (*cough cough Marvel), director Matt Reeves dives head first and provides real stakes to the actions. Characters that you grew close to meet sometimes fatal fates and you are constantly fearing of whether or not certain characters, apes or humans, will actually make it out of the conflict alive. It it gripping when it happens and that is all due to the excellent character development that occurred not only in this film, but the previous two as well.

There is a lot of down time and sometimes the pacing can drag on a bit. This becomes extremely evident during the second act of the film where you think you’re about to head into the finale and what point, and it continues on with its prison sequence. The scenes are good, it’s just there could have been some scenes that were cut to make this movie not seem as long as it was. It is nearly two and half hours long so be prepared.

War for the Planet of the Apes is a stunning end to a great trilogy. The character moments are what primarily drive this film, and Caesar delivers the most compelling arc in this series. His struggles in the previous films come to haunt him and that proves a great dichotomy with the humans. While there is not a ton of action, you still care when it happens and are holding your breath hoping to see if your favorite ape or human makes it out alive. I definitely recommend viewing the previous two entries in this series before making your way to this one as it resolves all of the arcs and issues to put a nice bow on this trilogy. 2017 continues to prove that it is the definitive year for movies.