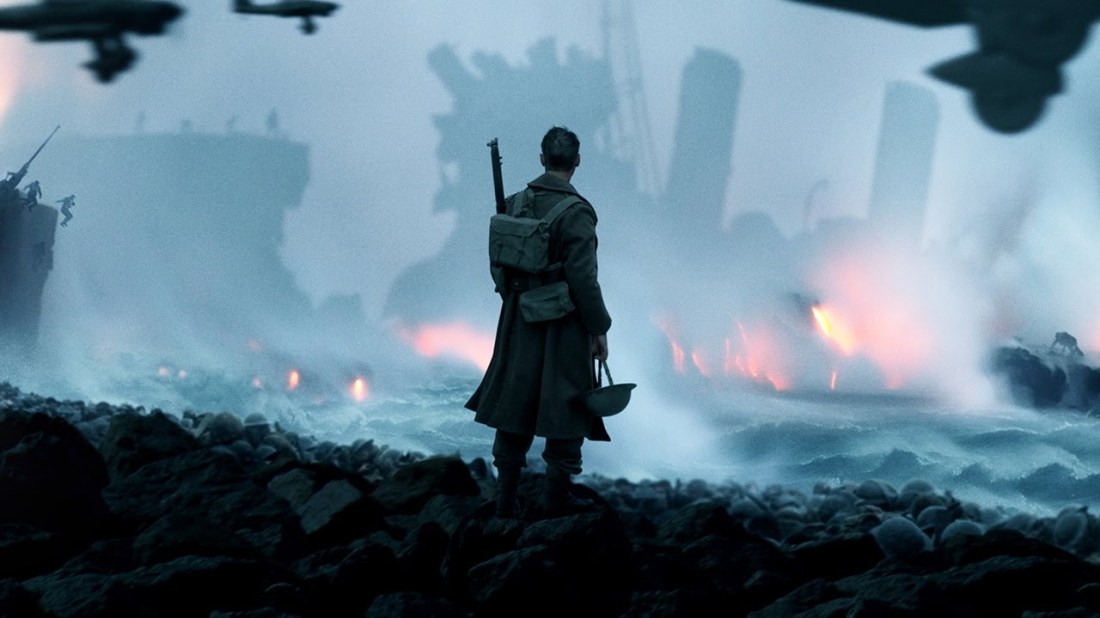 Within the first five minutes of this movie, my fist was clenched, my teeth were grinding, I was holding my breath, and I was on the edge of my seat. These feelings did not go away until the credits started to roll, and even then I was still in shock and awe at what I had just witnessed. After all this had occurred, I was left with only one thought in my mind, “Damn”. Dunkirk locks you in from the first second of the movie and never lets you go, inviting you into one of the most exhilarating and suspenseful war movies of all time. This is not only a great war movie or a great Christopher Nolan movie, it is by far the best movie of the Summer (sorry Baby Driver) and quite possibly a serious Oscar contender for 2017.

The movie showcases the events of the Battle of Dunkirk that occurred during WWII in which 400,000 British and French soldiers are desperately trying to get home with the Germans right on top of them. It is the event that is taking place in this movie, and it invites you to explore all the emotions these men faced with their perilous situation on the beach.

Director Christopher Nolan is by far my favorite movie director working today. His signature style, scope, storytelling, actors etc. are all masterfully done making each of his movies an utter masterpiece. I would put almost all of his movies in my top ten favorite movies of all time. With that being said, there is a certain level of bias and caution I have when going into one of his movies. I want to make sure I carefully analyze everything he does and not let my excitement skew my judgement of the movie. Thankfully, this was not the case.

There are no real “characters” or protagonists in this film, but rather a group of individual people fighting for survival. The people are barely referred to by name and have minimal dialogue, but that doesn’t stop you from caring about their situation and constantly fearing for their safety. Each person does a phenomenal job in their role whether Tom Hardy as a pilot who must do a lot of acting with just his eyes, or Cillian Murphy as a frightened soldier who showcases some of the true terror of coming home from war. Even Harry Styles (his acting debut) gives a fantastic performance as a soldier frightened for his life on this beach and desperately trying to get home. The standout is Mark Rylance who has a calm yet stern presence as a dutiful man to his country.

The people in this movie give a great sense of what this event is. The people on the beach are young, no older than eighteen I would say, and they are in pure terror at the Germans closing in on their position. With each step forward they take, it’s two steps backwards and each person conveys a sense of hopelessness and yet courage masterfully. You feel with these characters even though you have no background on who they are or where they come from. They could be a bully at their high school, yet you are still going to fear for their life as this emotional spectacle unfolds.

The “plot” of this movie is told non-linearly from three different perspectives: land, air, and sea. Each perspective is told under a different timeline and the craft of how they come together is all masterfully done. One of Nolan’s signatures is his ability to craft a well grounded and cohesive film that ties everything together in the end, and Dunkirk is no exception. I put plot in quotations simply because stories are usually led by the characters of the film, but since not a lot is known about the characters you forced to look at other things. Nolan is capturing the event, the snapshot, of WWII and isn’t trying to deliver a complex narrative. But the way he captures the event is unique and makes it stand apart from other war films.

This movie very much focuses on the event of the Battle of Dunkirk and how these soldiers get home. You are not experiencing the horror of war with millions of bloody bodies scattered around a person, but rather the pure terror of it. These characters are fighting for their lives and they see that home is just on the horizon but the enemy is so close behind them. You are with these people on the beach and are able to experience the pure terror of their plight and be locked into the battle with them. They are not the only ones fighting for a breath of air or a boat off the beach, you are with them fighting the same battle.

This movie would not be as spectacular as it is without the beautiful camerawork and cinematography. The film looks absolutely gorgeous from the foggy beaches to the tainted sea waters, you really feel like you’re in the movie. It also helps that Nolan utilizes real locations and practical effects for his movie, only using CGI to enhance certain things and never to create effects. It adds a new depth to the movie that can only be truly experienced in the IMAX viewing. (I unfortunately have not yet had the chance to view the film in IMAX but you better believe I am going to).

Once again Hans Zimmer’s score plays a pivotal role in this movie and further brings you into the experience. There are moments of quietness and then loud thunderous scores where your excitement heightens and you feel the tension in the situation. The score in its own right tells a story of its own.

This film is not for all audiences and that’s where the film lends itself to some small flaws. This film is event driven, not character driven like most movies. You don’t have rousing speeches to rally the troops, or campfire chats of what’s waiting at home. There are no arcs in this movie which can detract a few audiences and that is perfectly understandable. For me though, this did not change the fact about how I felt for their safety! The nonlinear structure can also be a bit confusing and jarring sometimes, but that is one of the reasons I love Nolan’s films. You pick up so much more upon multiple viewings which makes the film even better. However, I can see how this may turn off some viewers and make the film underwhelming.

Dunkirk is once again another monumental success for Nolan. He drops you into the event and makes you a part of this group that is so desperately trying to survive. It is a realistic take on war with no serious character development or plot but rather a showcasing of the true fright and adrenaline fueled experience of fighting for your life. All the actors do an outstanding job and make you fear for each of their individual lives despite minimal information. The craft and spectacle of directing only helps to fully immerse you. While this movie may not be for everyone given its more serious tone, it is undoubtedly another masterpiece in film-making. Nolan yet again adds another film to his large collection of success, and into my top ten favorite movies of all time.