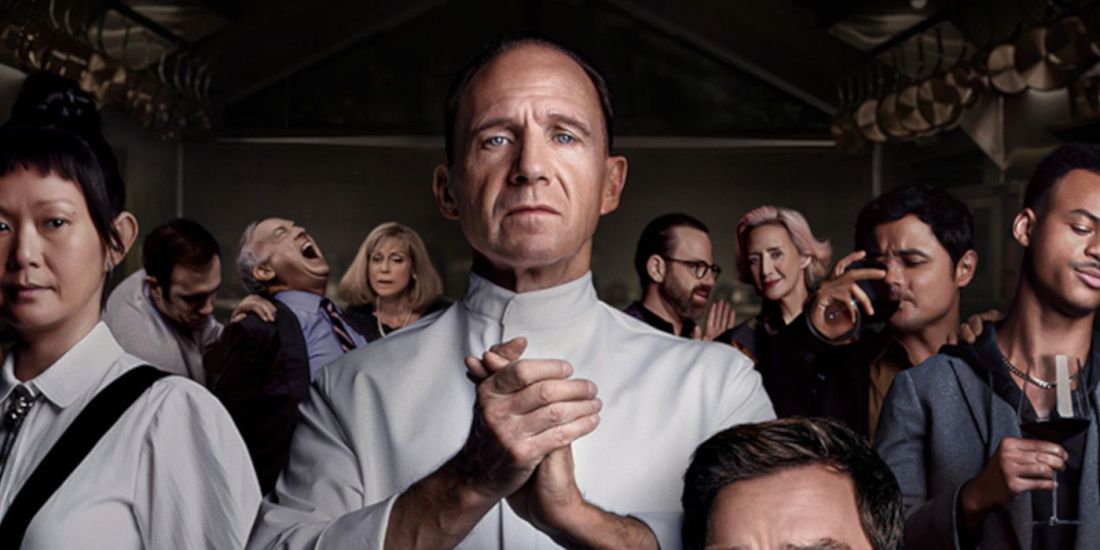 I had no idea what I was in for when I first entered The Menu. I had heard it was a movie about food and I was like “hey I love food”, and was expecting some great acting to accompany it. This movie has a lot more going on under the surface then just food, as The Menu is a social satire that dives deep into the themes of obsession, class welfare, and the poverty gap so much so that it blew me away. It also has what I consider a career best performance in Ralph Fiennes who leads this movie in a charismatic yet haunting manner. A lot of things go right making it undoubtedly one of the best films of 2022.

The movie focuses on a young couple (Nicholas Hoult and Anya Taylor-Joy) who visits an exclusive destination restaurant on a remote island where the acclaimed chef (Ralph Fiennes) has prepared a lavish tasting menu, along with some shocking surprises.

The minimum two elements that make this movie work so well are its cast and expert direction that create a climbing sense of tension throughout its runtime. The film starts out with a small uneasy feeling that slowly and meticulously builds pressure and boils over like making a stew to the point where I was unknowingly clenching my fist really hard. Capturing that sort of momentum that crescendos ever so slightly with each passing second is a magnificent achievement that makes this film memorable.

As I mentioned before, Ralph Fiennes delivers a career best performance in his role as the head chef of the restaurant. He balances charisma, dominance, endearing, convicting, humorous, and intimidating seamlessly to the point where it becomes unpredictable about how things will go down. He’s wickedly funny but also soft-spoken, imbuing a sense of unblinking perfectionism with a threatening stare that makes him unpredictability and predictably captivating at the same time. He overflows with authority to the point that even as he lays out what is going to happen, no one dares make a move. This is a obsessed and detailed man who plans out everything in obsessive detail to mask the mounting pain and frustration in dealing with his guests.

The film has a mystery at it’s center in terms of questions that manifest about the secrets and twists that unfold throughout the narrative. This mystery mounts an unsurmounting amount of tension that had me on the edge of my seat. Each dish is introduced with a loud banging clap, that brings the attention directly on the chef and restarts the counter and mystery of what intriguing yet horrific entry could be next. With that sense of mystery, the film is also unafraid to have its social commentary spread throughout regarding consumerism and class welfare, particularly as it comes to the dichotomy between Nicholas Hoult’s character and Anya Taylor-Joy’s.

The movie closely examines how each of the guests treat the staff working within this restaurant and wide disparity there is between the elitists and those serving them. This restaurant is so expensive that it has deconstructed meals down to artsy craft such as leaves thrown on rocks or bread less bread plates for the sake of it, and yet the guests in all of their pretentiousness mock the aesthetic even though its the experience they paid for. What the directors/writers of the film do with this idea, especially in the close examination of each character, provided some powerful commentary that didn’t feel too heavy handed but enhanced the overall experience.

Humor in movies now a days can feel like cheap gags that take away the impact of the moment and kill the tension, but in The Menu it serves as a way break the tension at just the right moments. This is one of the funniest movies I’ve seen this year, generating some genuine laughs that added smart moments of brevity on a film that hinges more or less on the thriller side of things. It’s a delicate balance to have horror and comedy in a film, but I am proud to say that The Menu achieves this fantastically.

Artistically, this film is dazzling to look at from the interior of the restaurant the guests are sitting in for the majority of the runtime to the delicacies of each dish. The cinematography is gorgeous making this a treat to marvel at. Additionally, the score only seeks to enhance the excellent tensions with a powerful string quartet that keeps you on the edge of your seat for more.

While artistic films like this usually don’t get noticed by bigger audiences, this is a movie I cannot more highly recommend you see! If you are tired of films that are unoriginal or formulaic, this is the movie for you. The more we support movies like this, the more original movies we will get in the future. The Menu is a masterclass in filmmaking that maintains its tension for the entire runtime and delivers one heck of a finale. It’s playing in a majority of theaters right now, and I highly recommend you see it!