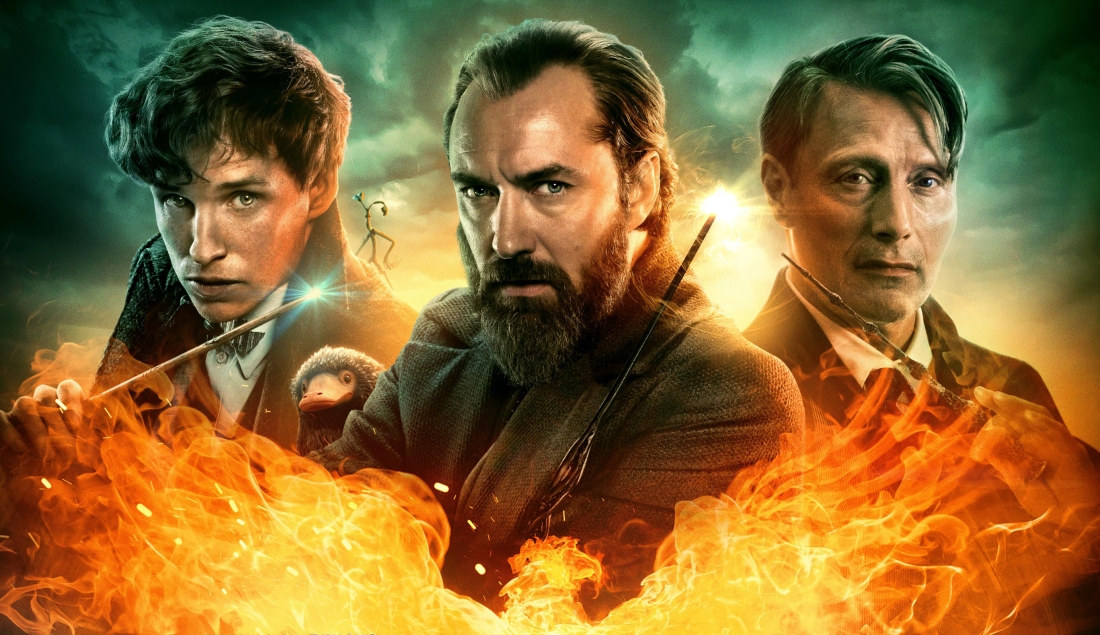 No matter what, I will always be excited for a new Harry Potter movie. It was such an integral part of my childhood that its hard to not have some semblance of hope to think the writers and creative team just may pull off this Fantastic Beasts franchise. But as soon as I didn’t feel those same goosebumps I normally feel when the Warner Brother’s logo appears when watching Secrets of Dumbledore, I knew that we were in for something else. That should have been expected given the recent controversies surrounding J.K. Rowling, the recasting of Johnny Depp, the troubled production of the film, and the overall COVID-19 pandemic, but there was a part of me that thought the magic would shine bright! Secrets of Dumbledore is a minor improvement over the last film, but it frustratingly fails to capitalize on any interesting story threads in favor of dull writing, needless subplots, unnecessary characters, and lack of magical wizardry. Ending the franchise here would only add to the frustration, but seeing as the commercial and critical of this film dictates whether we will see the final two films, those outlooks don’t look promising.

What makes this film particularly frustrating is that there really is no plot or story despite there being numerous opportunities to explore something interesting. Dumbledore needs to move against Grindelwald but can’t due to a blood pact they made together, so Dumbledore must enlist the help of Newt Scamander and his friends. However the mission that is given to Newt (whose purpose is barely justifiable at this point), Jacob (our muggle friend whose inclusion in this film makes no sense), Theseus (a missed opportunity), Professor Hicks (no introduction is given), Bunty (literally 2 minutes of screen time), and Yusuf Kama (I had to look him up too, don’t worry) is tediously vague with no real objective or purpose. The goal is ultimately to stop Grindelwald, but it isn’t clear how they will stop him, what they are stopping him from, what the threat level is, or what the end result should be. The movie whisks away from set piece to set piece and creates needless subplots to create its runtime.

It becomes even more frustrating when there is a mountain of opportunity with the characters present, and yet the film does absolutely nothing with it. We find out that Dumbledore had a romantic relationship with Grindelwald through some small dialogue, but we never see what made Dumbledore want to follow Grindelwald. What could have been an interesting story thread to explore and give more backstory to one of our favorite wizards is replaced with pointless side quests with no real aim or purpose. And speaking of the Secrets of Dumbledore, there are no real secrets that are being explored. One reveal from the previous film is mildly clarified but Dumbledore himself is not really in the film that much. I maintain what I said about the last film in that the relationship/rivalry/dichotomy between Dumbledore and Grindelwald is what should be center stage of these prequel films. After Fantastic Beasts and Where to Find Them, the focus should have been strongly shifted to give fans of the series what they actually want to see.

Speaking of those characters, their inclusion in this story of Dumbledore and Grindelwald is grossly unnecessary and only adds to main problem of this new franchise. The arcs of Newt, Jacob, Queenie, and Tina (who is barely in the film I might add), all satisfyingly ended in the first film. Bringing them back in the second film was a stretch, and their inclusion here is unnecessary and utterly wasted. Queenie has joined Grindelwald’s forces and her sister Tina is barely in the movie. There could have been a great conflict with Tina and Queenie struggling on being on opposing sides of a conflict. Newt and his brother are polar opposites in personality and the film never explores that relationship and how they still come together in the end. Jacob literally is only in the film because he “has a good heart”, but there are so many other wizards that easily could have filled his role, what makes him so special? The characters are included here for familiarity sake, but the writers fail to do interesting with them or explore interesting dynamics that could be taken advantage of.

Mads Mikkelsen as Grindelwald is a welcome casting choice, but similar to the other characters, nothing interesting is done with him or explored. Mikkelsen goes for more of a scheming politician rather than a blood thirsty purist, which is a welcome change but we never see his ideology explored and why he has amassed so many followers. The film attempts to make a commentary on elections and how we elect leaders, but it never is at the expense of exploring ideologies, opinions, views, or tactics that would allow us to understand where each one is coming from. We know that Grindelwald is the villain, but we have no idea what drives him, why he is so insistent on his war with Muggles, and what his goal looks like. The original Harry Potter films had the Malloy family following after Voldemort and you can understand what draw them to him and why they would feel conflicted on following him. No such characterization or insight is given to Grindelwald even though an opportunity is there with Queenie and Credence. Rather, Grindelwald does a few magical things to manipulate events in his favor without any question. It’s lazy and disappointing writing, especially from a franchise known for understandable villains.

And for a movie set in the Wizarding World, there is a severe lack of magic, awe, and wonder within this film. It never actually feels like this is a film with magical machinations happening, but rather it feels like an afterthought. If you didn’t have the original Harry Potter theme playing every so often, it would be hard to determine that this is actually a movie set in that same universe. The previous films had interesting lore that fleshed out the world and made it feel alive and lived in . You have magical objects like Horcurux’s and the Deathly Hallows, or magical beasts such as the Obscurial or Hippogriff, or magical spells that created exciting action sequences, but none of that same world building and intrigue is present in this film. There are maybe small glimpses of it here and there, but nothing that stands out or makes it feel like a Harry Potter film.

The concept of these films shouldn’t be a hard thing to do: have Dumbledore and Grindelwald in conflict with one another, exploring ideologies and motives, and having some epic battles. You can explore their quest for the Deathly Hallows, or the relationship they shared, or the tension within the Dumbledore family, or the rise of Grindelwald’s powers, or literally anything else than what is presented on the screen, It’s so frustrating to see this franchise miss the mark on literally everything in their sight. This was supposed to originally be a trilogy but then expanded to five movies. Seeing these first three movies makes it highly evident that it could have and should have easily stayed a trilogy as they don’t know what they are doing.

The ending of the film gives a small glimpse of what could happen between Dumbledore and Grindelwald in their epic clash, but unfortunately I don’t think we are going to see it. The film has the lowest opening box office for any Harry Potter film, showing that fans are becoming just as disinterested as I have become. It’s heartbreaking to see this franchise likely end on this mundane note. If by some miracle we see the last two films in this planned five film saga, I sure hope they would be able to quickly correct themselves. But sadly, there is very little hope at all I have for a franchise that once made me feel like a little kid again in awe and wonder of the spell it cast on me.