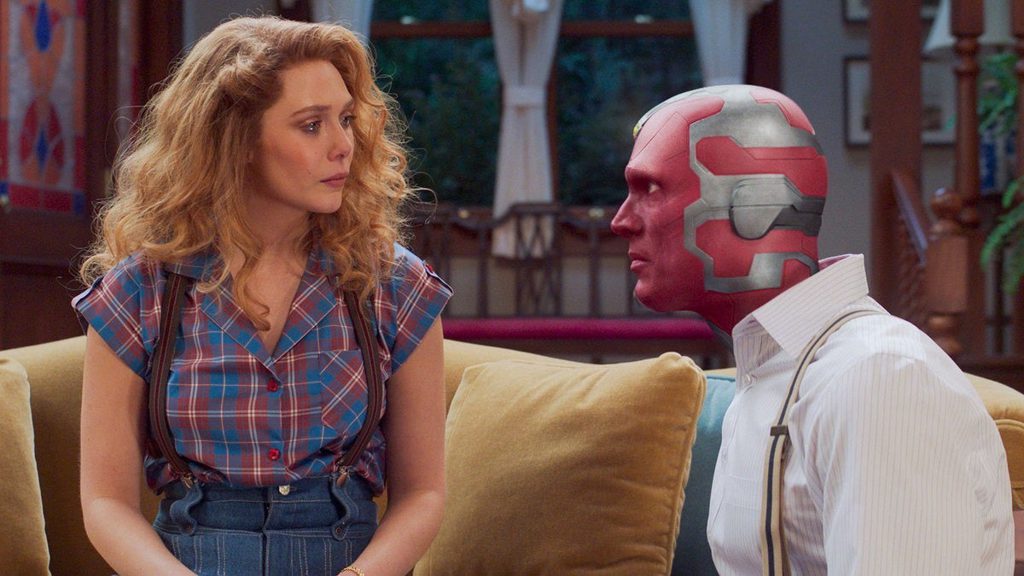 Do You Really Want To Know?

After breaking away from the sitcom element entirely and giving us insight into the operations of S.W.O.R.D., WandaVision now has to manage both those story elements going forward without overplaying one side or another. Thankfully, this weeks episode excellently balances those two elements together in a surprisingly fun, mysterious, and exciting manner that is easily one of the best for the series.

The episode interchanges between Wanda’s reality and the real world, giving us real time perspectives on the events happening. While the homage to the 80’s era of television is made with a Full House reference, it is merely a backdrop for the more sinister and intriguing elements within. The story is set to Wanda and Vision adjusting to becoming new parents and then Agnes enters the picture and begins to act quite odd. The references that the reality is breaking are becoming more overt, and the character reactions particularly Vision become more self-aware and curious as to what’s going on. I have seen a lot of theories as to who Agnes may truly be, maybe Mephisto from the comics who is influencing Wanda to make this reality but at this moment only time will tell.

Switching back to the real world, we see that the agents of S.W.O.R.D are starting to see Wanda as a threat and more villainous given what Monica Rambeau reported. It keeps the continuity of the Sokovia Accords entact from Captain America: Civil War while also allowing us to see where Director Hayward is coming from. Wanda fought against the Avengers, destroyed a city in Lagos, and is now holding a city hostage, it is no wonder that they are scared and wanting to fight to against her. On the contrary, Wanda’s grief is certainly understandable and has made her do some big things such as stealing Vision’s body and resurrecting him within this reality. Seeing the Marvel Cinematic Universe paint its story in such a grey manner rather than a good vs evil remains the most interesting and ambitious part of this show, and I am loving every second of it.

That scene where Wanda exits the “Hex” reality and into the real world to threaten the agents of S.W.O.R.D was such a great moment for the show and conveyed just how scary and dangerous Wanda can be. She drops the accent and just asks to be left alone, but the fear she instills in the agents and even the audience is palpably real. Elizabeth Olsen does an excellent job of balancing the comedic timing with the darker elements of the show that honestly make it rise to one of the top MCU performances. She can be sweet and innocent mother to a vengeful and grief-stricken witch in a manner of a second and that should receive some high praise.

While the audience may start to see Wanda more as a villain as the true extent of her actions are seen within the side characters and commentary. Norm begs to go back to his normal life, Monica states she felt violated, and Director Hayward states that she is keep over 1,000 innocent civilians hostage for her benefit. The show may run the danger of making Wanda’s actions irredeemable and I am hoping that we get more insight into her psyche through scenes with Vision and the kids rather than just being told the consequences. Granted we do get that in a few key scenes, but I am interested to see more going forward.

Vision definitely catches on to Wanda’s intentions and villainy as he begins pulling on the string and confronting Wanda about what she is doing. Paul Bettany’s fear felt excruciatingly painful, and Wanda’s gaslighting of Vision’s concern certainly ramps up the tension and brought a comic book moment to life with Vision getting angrier and angrier to the point where they are both levitating almost ready to battle it out. Vision’s realization confirm the audiences feelings of Wanda being the villain and again make for an intriguing and fascinating character study going into the final four episodes.

That last scene shows that Quicksilver is back!!! All though it isn’t Aaron Taylor Johnson from Avengers: Age of Ultron but rather Evan Peters from Fox’s X-Men movies. This conveys the multiverse nature that Marvel is going for in Phase 4 and has big implications going forward for not only the series but the franchise as a whole. Could this mean we could see Magneto or even Wolverine soon? Will other Fox X-Men characters get there due shine in the MCU? Only time will tell, and it will be interesting to see how this cameo will influence Wanda going forward. By the looks of it, she seems stunned to see him and wasn’t expecting this recreation. Could it possibly be that Wanda’s powers are going beyond her control?

A few other things to note:

Episode 5 is the series best episode to date, balancing its signature elements together effortlessly to deliver a tense and exciting episode. With only four episodes left, Marvel isn’t holding back its punches in ramping up the intensity and stakes. Wanda morally grey nature gets some more development and Vision’s background gets some more questions. I am excited to see these characters develop and debate where the show could be taking them next!