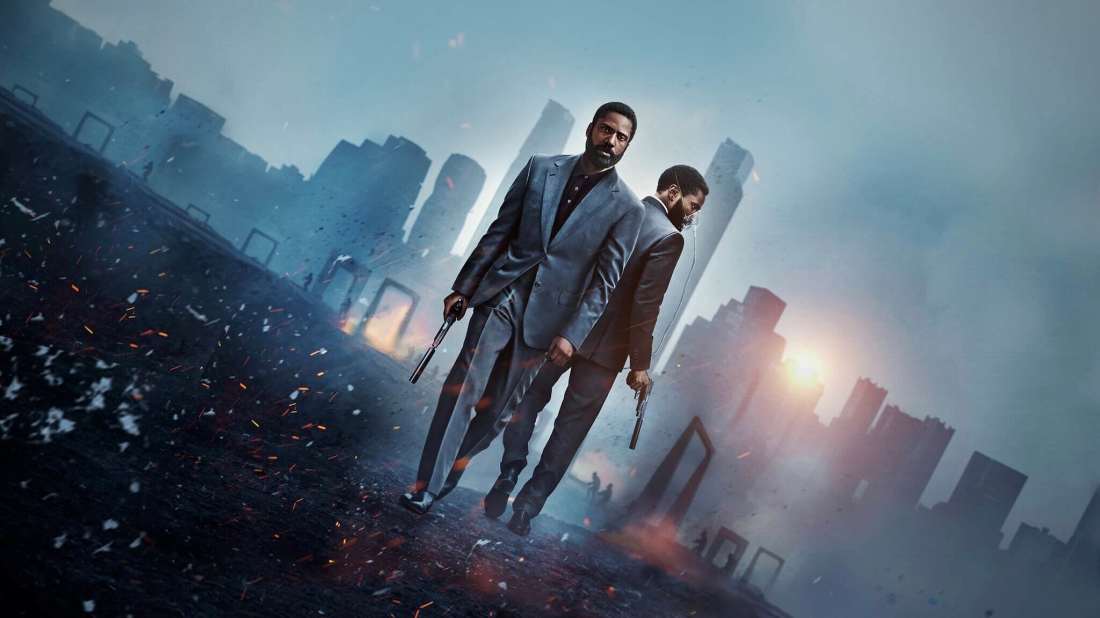 Christoper Nolan’s latest entry is certainly one of his most ambitious and boldest films yet. It features some of the most impressive action sequences and cinematic concepts in recent years, and trusts its audience to tag along for the ride. That in itself should be praised to see Nolan be such an ingenious and dynamic director. Unfortunately, the film can be inacessible at times with its convoluted plot and lack of emotional depth making this one of Nolan’s lesser films. But even a lesser Nolan film is still an amazing experience to watch and Tenet is definitely a movie that will be remembered and talked about in the years to come.

A secret agent embarks on a dangerous, time-bending mission to prevent the start of World War III. In an effort to keep plot details secret, I am only providing the one sentence synopsis listed on the website. The least you know about Tenet before going in, the more authentic an experience you will receive.

Christopher Nolan has had an obsession with the concept of time since his debut as a director. He loves exploring how we perceive time, messing with a narrative structure from a different time perspective, and how the implications of time affect us as humans. In Tenet, he is confronting this concept head on and institutes a new trait called “inversion”. With this, (as you have seen from the trailers) time runs backwards for some but runs forward for others. The movie makes the wise decision to explain a little bit at a time then spend the majority of it showcasing this new idea, and man does he showcase it.

The way this new concept works in the film is easily the most unique and exciting aspect. The spectacle that Nolan portrays on screen is nothing short of awe-inspring. What he is able to do with this concept presents new and novel ideas that have not been seen in film before. One man fights another with the other man constantly moving backwards, a car chase shows one car moving backwards while the other is chasing it forwards, a building puts itself together just as it blows up, all of these moments are truly spectacular and are definitely worth the price of admission alone. This is further enhanced by Nolan’s trademark direction, chossing to use all practical effects rather than CGI. He commands the camera bringing you close in on the action and allowing you to feel part of the scene.

The score plays along with this as well, having a certain reversed quality to its sound mixing that heightens the tension in key scenes. Ludwig Göransson composed this score rather than Hans Zimmer as usual, but that doesn’t detract from the beauty of the music correlates with what’s happening on screen. It adds a new dimension of depth to the film to see how all aspects of the film are in conjunction with this concept of inversion.

The movie is very fast paced, moving along from plot point to plot point at an indiscernable pace that can often leave the viewer feeling whiplash. While the story is particularly complex and will defintiely take multiple viewings to truly pick up on all the details, I appreciate that Nolan always trusts his audience to figure it out rather than having big moments of exposition. He definitely embraces the “show don’t tell” mentality which respects the audience and their level of intellect when discerning the plot.

Like all of Nolan’s previous films (Inception, Dunkirk, and Memento in particular), it takes multiple viewings to truly understand the whole story and put all the pieces together yourself. That’s what I appreciate about Nolan the most, the fact that he gives you a cerebral puzzle with films and trusts you to figure it out. I always appreciate how I can revisit one of Nolan’s films and pick up on something new, and I’m sure that Tenet will be no different on multiple viewings .

With that being said, the plot is very convoluted in the beginning and is particularly hard to follow. This makes it particularly hard for average moviegoers to come in and enjoy this movie from a plot standpoint. This isn’t helped by the fact that this is a narrative driven movie rather than a character driven movie. Our central characters aren’t given enough insight and depth to allow the audience to feel attached, leaving audiences feeling a bit cold and alienated at times from what is going on screen. The story drives the film and the characters are along for the ride.

That does hurt the movie considering the amount of time we spend with these characters and trying to understand what is going on. It adds to the convoluted nature of the plot and doesn’t enhance the overall viewing experience.  Don’t expect to know why these characters are there, or why they are so invested in the situation. Nolan’s other film Inception, at least tried to explain why its central protagonist was invested in the heist but no such depth is given in Tenet.

However, upon a second viewing I found myself really enjoying Tenet and the complexities it has hidden underneath its initial surface. The more I think about Tenet and the character ambiguity and convoluted nature of the plot, the more I find myself unraveling and simply seeing the mastermind with which Christopher Nolan controls his movies. It is truly an awe-inspiring feat, and like his other movies definitely requires multiple multiple viewings to get the full effect.

Another notable criticism is the sound mixing with dialogue. There were numerous instances in which the dialogue was drowned out by the power of the score or the sound of the effects going on around the characters. It made it particularly hard to understand what character’s were saying further adding to the convolutedness of the movie. I will definitely need to watch this film with subtitles when it comes out on Blu-ray.

The movie is all about the spectacle and moving the narrative along to achieve that spectacle. There is quite a bit of set-up in the first half of the movie, but it all pays off in the second half where I truly started to love this movie and see Nolan at his best. It makes me appreciate that filmmakers like him are still working today and bringing fresh original ideas for people to enjoy. While the film could have been more approachable from a plot and character standpoint, it didn’t take away from the excitement and engagement I had during the entire film. I can’t wait to see this again and dissect another masterpiece Nolan has created. I just hope that he can learn from some of his trademark mistakes for next time.