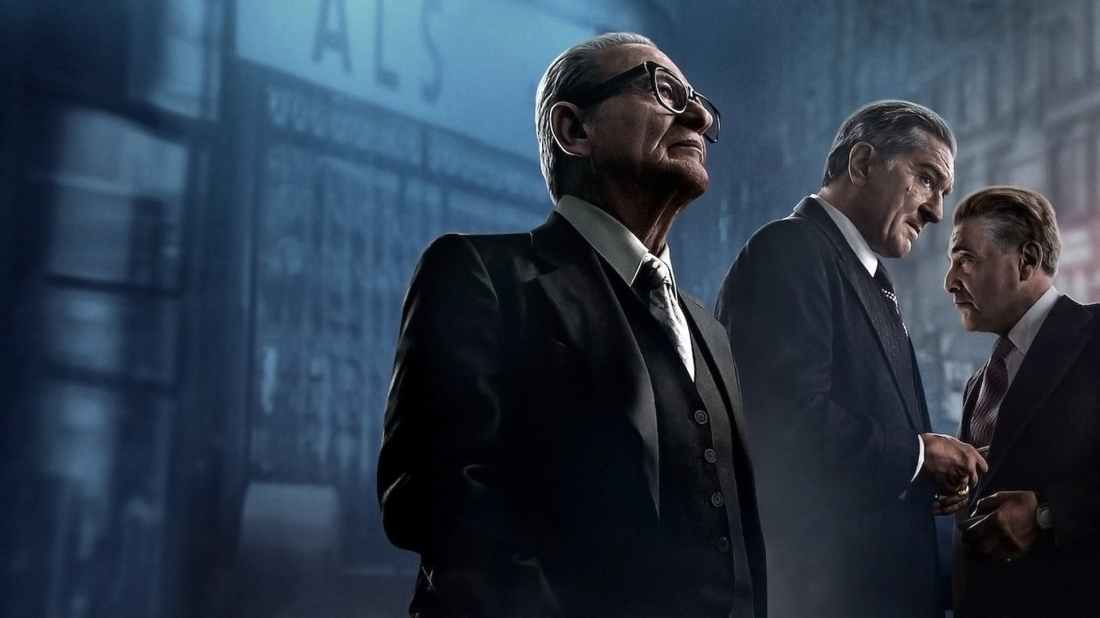 Martin Scorsesse returning to directing and giving us another crime drama epic is exactly what I wanted for Christmas. The Irishman not only is a return to form from his earlier works, it also proves to be an engaging story in its own right filled with interesting characters and superb performances from some of the most legendary actors. Within the first 20 minutes of this film, I was captivated and invested and that remained throughout the duration of the three and a half hour run time. Suffice to say, The Irishman is a phenomenal film that leaves a lot to love and debates in years to come.

Based on a true story, the film chronicles the events of Frank “The Irishman” Sheeran and his involvement with Jimmy Hoffa throughout the 1960s and the mob. Spanning various decades, we get to see the relationships that Sheeran forms and how inbested he becomes with the mob and those around him.

Robert DeNiro, Al Pacino, and Joe Pesci all return to the screen in top form with knockout performances. Each one plays a pivotal role in the film that plays to their strengths. Joe Pesci’s character, Russell a mob boss, is quiet yet intimidating you feel like he could kill you in the blink of an eye without even flinching and then just go about his day. He provided a fear and intimidation the likes of which I just haven’t felt from an actor in a while. Joe Pesci’s Jimmy Hoffa allows Pesci to be very loud and boisterous, playing to the actors strengths and giving some great comedy.

Finally, DeNiro’s Sheeran is the star of the show. He says so much with so little and the way he carries himself allows us to care and feel for him by the film’s conclusion. It appears his character is holding a lot back with his emotions and demeanor, and that works extremely well for the context of the film. DeNiro gives us a character worth investing in, allowing us to see his deepest thoughts and how he is going about processing them that makes the movie even more entertaining to watch. I would nominate him for an Oscar if I could.

What really makes this film great is how much it invests you into the world you are watching, so much so that you feel like you have lived through these events with these characters. The events that transpire feel like you are living them with these characters, you experience the tension, excitement, and emotion of each moment. The movie does an excellent job at introducing its core characters and showing the relationships formed between them that by the film’s end we feel like we have lived an entire life with these characters. The movie has a lot of ground to cover and when our characters are looking back on their lives it causes us to also look back on our lives. That’s something very few movies are capable of doing, but The Irishman makes it seem so easy and seamless.

The movie is three and a half hours long but it never felt like that to me; it is and extremely well paced film that properly scatters its exciting moments and built up throughout the movie. I told myself that I was only going to watch the first hour of the movie and then pick it back up the next day, but I ended up watching all three and a half hours in just one sitting because of how engaged I was in the narrative. Scorsesse allows for gripping and tense moments, but also times where our characters are allowed to think and process of how to proceed through to the next event. In a movie featuring a lot of older men just sitting around and having conversations with one another, it is to the movies credit that it is such a joy to watch.

Scorsesse allows us not only to see into our character’s minds but also their hearts, giving us a true emotional attachment especially with DeNiro’s character. It gives the movie room an extra layer that isn’t normally in movies nowadays. The final 30 minutes are especially heartbreaking and reflective, causing us as the audience to think our own lives and the choices we have made to get us where we are. DeNiro’s character goes through and deals with a lot, and when all is said and done it caused me to think of all the things, both good and bad, that I’ve done and where that will take me in my life. Suffice to say that The Irishman evokes more than just an epic crime drama, but a true introspective and retrospective look on mortality and life.

There are very few flaws in this movie. The movie did not bore me, it did not frustrate me, and it did not disappoint. It provides an engaging narrative, emotional depth, and fantastic characters all played by some of the most legendary actors in Hollywood! What else could you want? The run time may be a little daunting for some, but with it being on Netflix you can watch as much or as little as you want in one sitting. I loved this movie, and it leaves a lot of room for discussion and debate in the years to come. While certainly not as great as some of Scorsesse’s other films, The Irishman is a return to form for the director and makes you crave more genius films like this in the next decade.