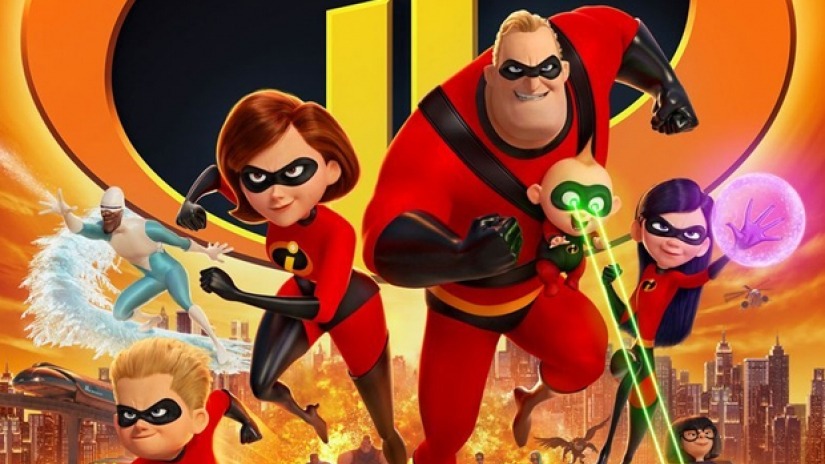 No. The Incredibles 2 is nowhere near as good as the original movie. There would be no way that it could ever live up to the original’s cleverness and depth. But that doesn’t stop it from being an entertaining and thrilling adventure. Even after 14 years, The Incredibles family still retains a lot of the charm, heart, and intensity that made them so iconic. It plunges us back into its interesting world and delivers a story with plenty of emotion and excitement to make this Pixar’s best sequel yet.

We are dropped back where we left our super family fighting The Underminer in a thrilling action sequence that seamlessly brings us back into the fray while also boasting the excellent advancements in animation. But even in light of stopping villains like Syndrome from the previous film, the law still states that Supers are illegal and the Incredibles family is forced back into a mundane life trying to stay afloat in the working world. Soon after, Elastigirl is offered the opportunity to bring Supers back into the light leaving Mr. Incredible at home to watch the kids in an effort to create a better future for all superheroes across the world.

If the first film was mainly Mr. Incredible’s story, the second film is more or less centered around Elastigirl. She bears the responsibility of showing the world that Supers are not as bad and they can do some good. While there is no serious arc she goes through, it is nice to have her ideologies and views be a focus. Seeing her use her strengths in the field is definitely exciting and provides a nice gender swap role reversal from the first film. However, her story does not take precedence over the family dynamic that made the first film so rich. The Incredibles family are definitely acting as a family and team from the very beginning even if they are both doing separate things.

While Elastigirl’s side has all of the exciting superhero antics, Mr. Incredible is tasked with the responsibility of helping Dash with math, Violet with boy troubles, and Jack-Jack with his new emerging powers; the burgeoning responsibilities a working class family more or less deals with. Even though there are no thrills or action in this department of the story, it is still highly entertaining and heart-felt to watch Mr. Incredible try to be the best father he can be. He still retains that passion for wanting to feel important and needed, and it is joyous to see how he navigates different types of problems than he is used to. These sequences truly exemplify that there is more than one way to be a hero.

These two stories together is the foundation of what this film drives with. Each person is trying to do the best they can for their family so that they can have a better future. They’re a team and not for one second do you believe you are watching two different movies. It is all interconnected and a feat that few movies have been able to pull off. Separating your team on separate missions can hurt superhero films, (i.e. Guardians of the Galaxy Vol. 2 or Avengers: Age of Ultron) but The Incredibles 2 easily embraces the challenge and strikes the right balance to make the film so coherent.

On top of that excellent foundation, we are presented with glorious, tension-filled, exciting action sequences that rival even the best modern superhero movies. Seeing each hero use their powers in a creative way creates for some serious thrills that had me on the edge of my seat. We are already invested in this family so we feel the stakes when the action goes does making them all the more amazing.  From Frozone’s elevation of his ice powers to Jack-Jack’s emerging new powers, the powers in this movie are on a new level especially when it gets to the third act which easily rivals some of The Avengers action sequences.

This movie definitely doesn’t live up to the original, and that is embodied in the new villain Screenslaver. The motivations aren’t nearly as sophisticated and deep as Syndrome’s from the previous movie. In fact, they are way too simple and hurt the movie since there are not the battling ideologies this time around. The twists that happen with the villain are also easily predictable which hurts the impact of the third act. There is some potential, but never truly given the time to explore and develop.

But the film is more about the Incredibles family rather than the villain that seeks to change the quota of the world, and on that level it succeeds. The Incredibles 2 definitely has the case of sequelitis at times, but still presents itself in an interesting and contriving manner to justify its existence. It’s great seeing the family all together again and the difficulties each encounters, and seeing them all teamed together in action is definitely a treat. Retaining the same essence of the first is a difficult task, but Pixar has proved that it is more than capable of delivering an awesome sophomore outing. The 14 year wait was definitely worth it.

Check out my thoughts on the first film and I why I think it is one of the best superhero movies of all time: The Incredibles Review