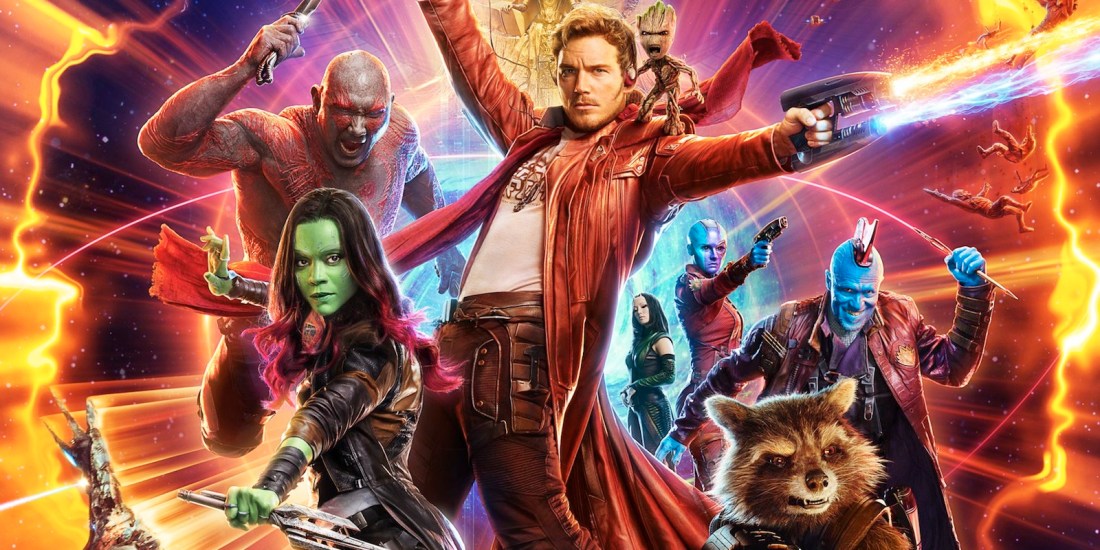 The first Guardians of the Galaxy film was a surprise hit. Marvel took a group of unbeknownst characters and delivered a fun, humorous, action-packed, and often times emotional adventure. Living up to that expectation is a hard task for Guardians of the Galaxy Vol. 2 to accomplish, and for the most part it isn’t able to capture the same charm. However, it is a good enough sequel that properly picks up events from the first film and delivers some entertainment value to keep audiences invested.

Set about six months after the events of the first film, Peter Quill/Star Lord (Chris Pratt), Gamora (Zoe Saldana), Rocket Raccoon (Bradley Cooper), Drax (Dave Bautista), and adorable Baby Groot (Vin Diesel) are all praised for their efforts against Ronan. They do small jobs to get money and help others out. When a mysterious figure known as Ego (Kurt Russell) appears and claims to be Peter’s father, Peter must connect with him and discover where his true family resides.

All of the characters from the first film return and retain the same charm and wit audiences fell in love with. This is very much Peter’s movie as his relationship with his father is what drives the plot. He goes through more of an emotional arc, learning more about himself and his family and to truly discover what he is capable of.

The other characters fare well. Gamora’s relationship with her sister Nebula is explored, we learn a little more about Rocket’s creation, Drax has a fun time becoming friends with newcomer Mantis, and Baby Groot is just plain adorable. Mantis is a great new addition as she adds a humble and nervous presence to our ensemble team of brash and sometimes arrogant group of heroes. However, the standout goes to Yondu as we learn more about him and his past. His journey in this film takes some interesting beats and provides a new depth to his character that is appreciated in the scheme of the two movies.

The one major thing that disappointed me with the characters is that director James Gunn has decided to split up the Guardians this time and put them into small groups. So much time was spent in the first film by bringing together the team and by the end it felt earned when they stood together holding the Infinity Stone. In Vol.2 we have Peter, Gamora, and Drax going with Ego and Mantis and Rocket, Groot, and Nebula go with Yondu on an adventure of their own. It’s a bit disappointing to see, as this makes the film lack a cohesive narrative and structure to carry throughout.

By splitting up the characters, the plot suffers as we do not have our complete team together. Like I said, this feels more like a Star Lord movie than a Guardians of the Galaxy one. We spend most of our time with Peter reuniting with his father and the burgeoning relationship the two start to form. These moments are truly special as we get to see Peter discover what it means to have a father he has been looking for his entire life. Ego very much acts like Peter’s dad and it is a very genuine relationship that forms.

But when the movie cuts back to the other teams half, it is mainly played for humor. There is no substance or actual plot going on in this segment. It is simply something to give this band of characters of Rocket, Groot, and Nebula to do while Peter is off with Ego. The humor is still top notch as has become accustomed with Marvel movies these days, but there is no substance for the humor to bounce off of. As a result, this entire storyline with a band of space pirates nearly falls flat. Yondu’s arc, however, helps to redeem it in the end.

If the film spent most of its time focusing on the team dynamic instead of as individuals then I felt I would have liked this film more. My favorite part of the film is the third act when we see all of our heroes come back together to take out the villain. That is why the first film worked so well, the team dynamic carried through. Seeing them work together, banter off one another, and put aside differences feels earned by the film’s end even if we didn’t see too much conflict between them to begin with.

The music once again provides sure fire hits on all cylinders. The mix of 70’s and 80’s rock hits works well with the action and transitional scenes. It gives another layer to the film similar to the first that help it to succeed. Granted, Vol. 2 needs that layer more to make up for the plot but it is still a welcome treat to listen to these hits. They provide the same fun and excitement that people will be singing along to and looking up after they watch the film.

There is enjoyment to be had in Guardians of the Galaxy Vol. 2 as this band of characters is always a joy to watch on screen. However with the majority of investment being spent with Peter, the team dynamic that worked so well in the previous film is gone for the majority of the runtime. The plot ranges from being investing and emotional to just plain stupid for slapstick humor. The humor lands well, but there isn’t much substance in parts. The third act pulls the movie together making this a decent enough entry in the Marvel universe. I’m still excited to see their team-up with the Avengers coming soon, but for now I am a bit underwhelmed.