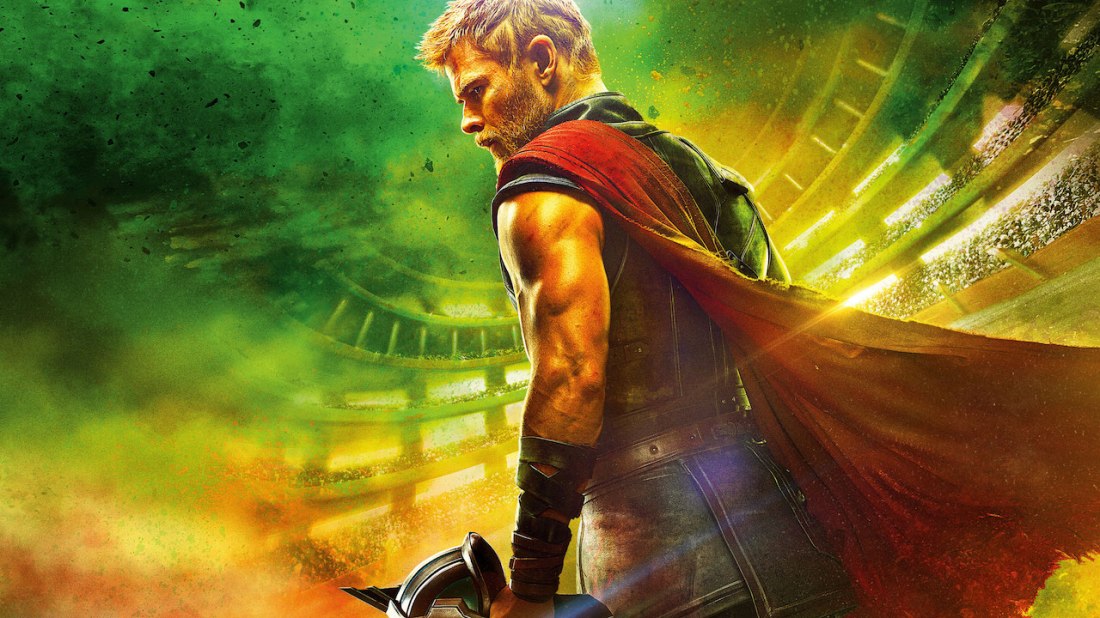 No Hammer? No Problem!

Thor: Ragnarok is a perfect example of what can make a superhero movie great and how to be bold and different. It reinvents its main character and goes all in on making this film feel different and lively. The assortment of bright colors, the excellent writing and humor, some wonderful new additions, and great action makes the newest Marvel movie stand out among the pack. While some may argue that this film overindulges itself, it is the most different, most wacky, and most unique Marvel film we have had to date and is easily the best Thor film but also one of the greatest Marvel films ever made.

When his hammer is destroyed by Hela the Goddess of Death, Thor (Chris Hemsworth) finds himself imprisoned on a mysterious planet far from home. There he comes along his fellow friend/Avenger Hulk (Mark Ruffalo) who has become a gladiatorial champion on the planet. Fearing the impending Ragnarok back on his home world, Thor must recruit a team to help him escape the foreign planet and return home to Asgard to stop Hela (Cate Blanchett) from bringing death and destruction.

From the start of the movie, it is clear that Marvel is trying to reinvent Thor and that is perfectly encapsulated by Chris Hemsworth’s performance. Instead of the serious and and sullen king of Asgard, Thor is now more lighthearted, humorous, and all around more fun. Hemsworth brings a real charm to the role that we haven’t seen in previous movies. He is more likable and down to earth and Hemsworth works each line of dialogue as if he is just being himself. When it comes to more serious moments however, you can truly root for Thor this time given how well Hemsworth sells the character. You can tell he is really having fun, relishing in the freedom he has and it is a treat to see on screen.

The other characters also do a great job in their roles. Tom Hiddleston’s Loki is just as conniving and entertaining to watch on screen. He is as manipulative and charismatic as always, except this time his antics have become a bit predictable that the movie starts to make a joke of it. Mark Ruffalo’s Hulk is extremely entertaining this time round spending more time as our favorite green monster than as Bruce Banner. Banner has been the Hulk for a while now, leading to Hulk being presented as young child which is hilarious to watch. Newcomer Tessa Thompson as Valkyrie brings a hardened no nonsense character ready to do whatever she wants without anyone bothering her which is entertaining to watch with the other characters on screen.

I can not go without mentioning Jeff Goldblum’s performance as the Grandmaster (easily my new favorite character). Goldblum  is essentially just being himself and having a lot of fun being an eccentric flashy ruler of the planet. He is hilarious to see on screen and adds a different element to the Marvel universe that we have not seen yet in a character.

The thing with Thor: Ragnarok is that it acts more like a comedy than a Shakespearean drama which is one of the film’s greatest strengths. The character’s are more lighthearted allowing the film to feel more fun and fresh instead of some of the seriousness we have seen in the past. There is a sense of self-awareness as if they know how ridiculous some elements of the story are. Jokes are thrown left and right making this a non-stop laugh fest. The chemistry of the characters adds to this humor as they play off of each other so well and Hemsworth is a fantastic comedic actor. Props to Taiki Waititi for making some great humor and being more fun as opposed to the brooding we have had in the past with Thor.

Ragnarok introduces Hela a villain while not fully developed ends up being a lot of fun to watch. Cate Blanchett chews up every scene she is in, relishing in the facade of being a villain. She is able to be menacing and imposing and while we are only given a little bit of backstory on her, it is enough to make her character work! She is not the most relatable villain by any means, but she does stand out with her presentation.

That’s what makes this film feel so different from the rest of them, the presentation and production of it all is something we haven’t seen before. The planet of Sakaar is rich with life and a lot of bright colors making it appealing to just watch it on screen. More than that, the film is just beautiful from each set design to the special effects giving this one a unique flavor given new director Taiki Waiti. This film really improved Thor the same way that Winter Soldier improved Captain America.

And above all, the film is just simply a blast to watch and so much fun to enjoy. Watching Thor be out of his element, or fight the Hulk, or having witty banter with everyone doesn’t get old with each subsequent watch. It just feels so entertaining and lively that you can’t help but smile when you watch this film. The jokes are astounding, the visuals are jaw-dropping, and the action is exciting!

The action is one of the best elements of this film with Thor constantly changing his tactics to get out of sticky situations. Its refreshing to see him without his hammer and how he will fight given how he relied so heavily on this weapon in the past. The film truly makes use of the “God of Thunder” aspect of his character and I was so excited when those powers truly broke out.

If the film has a flaw it is that the movie sometimes may have one too many jokes. Instead of letting a moment of drama settle, the film goes for the gag instead. But this only happens once or twice where it sort of bothered me and other than that the jokes and writing is fantastic!

The film is such a breath of fresh air to the MCU and I can’t speak more highly of how this film succeeds. It’s fast paced, it’s hilarious, it’s action packed, it’s gripping, it’s entertaining, and it’s masterpiece! I absolutely loved what they did with this film and I can’t wait to see this new and improved Thor throughout subsequent films. I hope Taiki Waiti returns to direct more films like this because with this vision and creativity there’s no telling how great the MCU could be in the future.